Most Popular Social App by State

How long has it been since you checked your Facebook app? How about Instagram or Snapchat? We’re guessing that whether you’re at work or home, it’s only been a few hours—or minutes?—since your fingers last started itching for your social fix. And, depending on where in the US you live, we may be able to predict which social media app you last opened.

Keep reading to see whether the results below sync with your experience in a given state. We’ve grouped the post by social media apps, listing the states where the app is most popular. 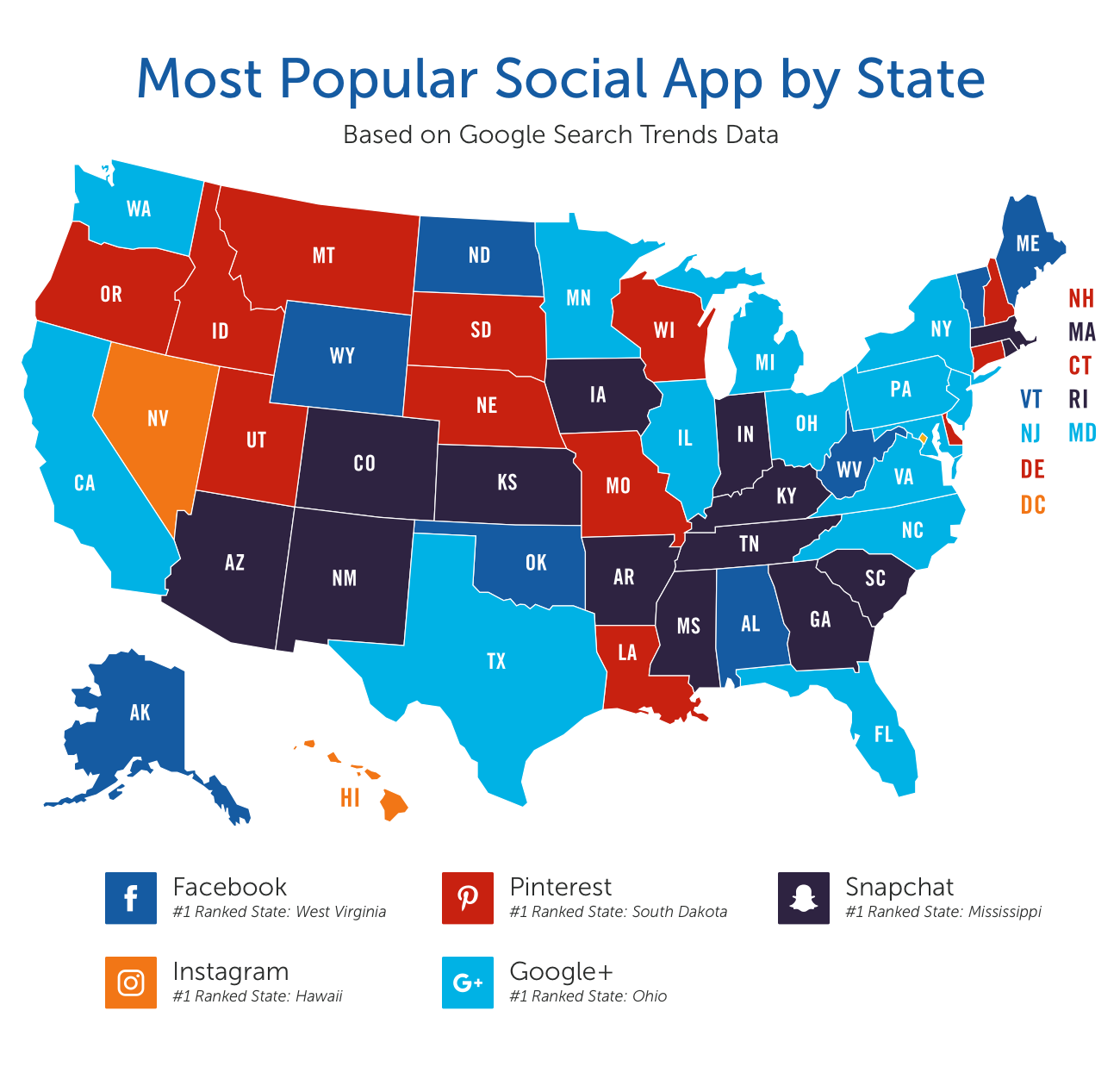 The Top Contestants: Google Plus and Snapchat

Google Plus and Snapchat tied for first place as the most downloaded apps in 14 states apiece.

Google Plus is one of the top-searched social media apps nationwide? Trust us—we’re surprised by this data too. Google Plus was generally considered a failed (not to mention expensive) social media experiment to compete with Facebook. Today, Facebook has 2 billion worldwide users to Google Plus’ 111 million.

Still, the increased Google Plus search queries indicate that the app is making a resurgence. Since Google Plus seems popular in states like California and Washington, which tend to be on the cutting edge of technology, it’s worth paying attention to Google’s much-maligned app. Who knows: according to data like this, it could be the social media trendsetter of the future.

Ohio lead the charge with the most Google Plus searches of any state in the union. These 13 states also gave Google Plus the lead:

Snapchat is especially popular with Generation Z (also known as the iGeneration, the age group directly following millennials), and its user bank extends from young teens on up.

Snapchat is more popular among teens than Instagram, Facebook, and Twitter, indicating that Snapchat has tapped into an audience that will likely keep it relevant as the rest of these social media apps start their way out.

Snapchat had the most mentions in Mississippi, but the app also came first in these states:

Pinterest stands out from the other social media apps listed here for a few reasons. Like Instagram and Tumblr, it works mainly in pictures. However, Pinterest features like creating boards that every user can view, not just your followers, are unique to this particular platform. Users visit Pinterest not to catch up with friends or check the news, but to get DIY help and artistic inspiration. They can also use it to shop for their favorite styles.

It shouldn’t come as a surprise, then, that this versatile, all-in-one social media app comes in third. South Dakotans take first place as Pinterest devotees. Check out these other pin-happy states:

To no one’s shock, Facebook is on its way out as that top social media platform. After all, it’s nearly 15 years old, and as you know from the data above, Generation Z has moved on to more modern apps.

Still, Facebook remains one of the top-five most-used apps nationwide, and the debate about how Facebook impacted the 2016 presidential elections ensures discussions about Facebook’s influence are here to stay.

Facebook is the most-searched social media app in a handful of states, with West Virginia ranking first in total search volume. West Virginia’s median age hovers around 42, which could help explain Facebook’s continued popularity—but Alaska also relies most on Facebook and has the second-lowest median age in the nation at 33, so age could be just one of many factors explaining Facebook’s popularity in states that range from the northeast to the far edge of Canada.

Along with West Virginia, seven other states enjoyed Facebook more than most:

However, Instagram is still holding its own. It had 800 million users in 2017, so we wouldn’t recommend counting Instagram out quite yet.

It makes sense that Instagram is most popular in Hawaii, a state known for its gorgeous scenery. Instagram also ranks first in two other areas:

No matter where you live or what web service provider you use to access the above apps, we’re confident you’re active on at least one of these platforms—so what do you think of our results? Does your most-used app parallel the stats from where you live? Do you have any thoughts about why people in your area might prefer Instagram to Facebook or Pinterest to Snapchat?