Most Popular Social App by State in 2019

Out of the 11 hours a day the average American spends interacting with electronic media, we dedicate around 45 minutes of that time to social media apps. But the way each American spends their hour or so connecting with friends, reading the news, and watching the most recent viral video differs from person to person and state to state.

Curious to see which app took the lead and compare your social media habits to the way your state searches, snaps, and connects? Check out our map! 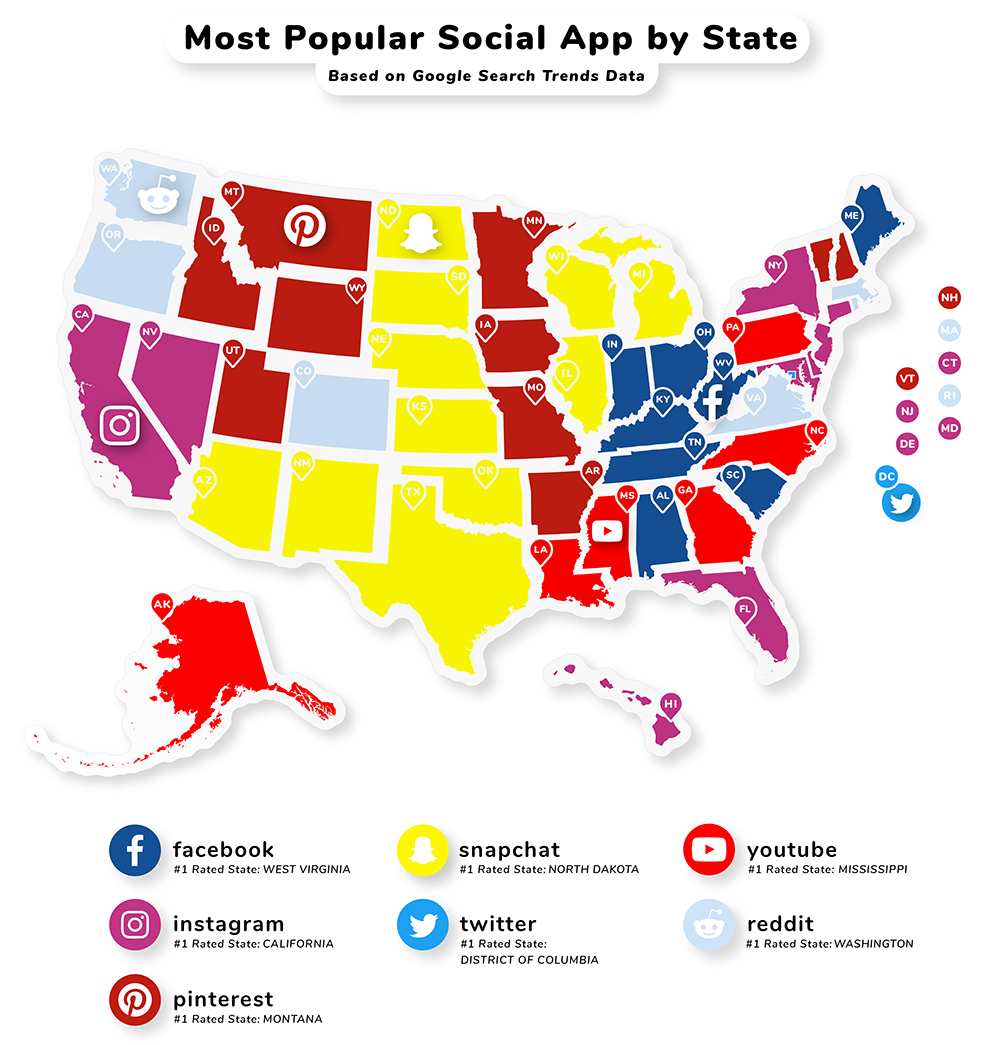 Snapchat tied with Google Plus for first place in our 2018 social media report, but this year, Google Plus searches fell off completely while Snapchat outpaced all competition. While Snapchat’s growth slowed in 2018—due in part to a redesign and backlash against algorithmic rather than chronological story sorting—it’s still the most popular app by state.

North Dakotans searched Snapchat more than anyone else, but the app came in first in ten other states too:

As the top-searched app in ten states (Snapchat came in first with 11), Pinterest narrowly took second place this year—the same ranking it got in last year’s report.

While many other social media apps have spent the last few years tangled in controversy (Snapchat struggles to moderate NSFW content; Facebook’s data leaks make front-page news), Pinterest does its best to steer clear of drama. The company is going public in 2019, so stay tuned to see if Pinterest’s place on Wall Street impacts next year’s ranking.

Pinterest is most popular in picturesque Montana, whose residents searched for it more than anyone else. These nine states also love the platform:

In a reversal of last year, Instagram beat its parent company, Facebook, for third place. Thanks to the swap, this year’s top three apps are image-based, not news- or text-based. Sunny, scenic California surpassed Hawaii this year as the state with the most Instagram-related searches, but Instagram still takes the cake in eight more states:

Even though Facebook has around 1.5 billion active daily users, it’s only fourth in our list, taking first in just eight states. Maybe Facebook’s long list of 2018 scandals kept it from the top and knocked it down a rank, but it still placed first in West Virginia, where residents searched for the app more than any other state.

The platform also came in first in these states:

Unlike the apps above, neither Reddit nor Youtube aims to connect users with friends. Reddit lets like-minded strangers create communities on practically any topic. Meanwhile, Youtube is one of the only sites that pays its influencers directly; it’s also the only one on our list with a premium paid streaming service.

Out of everyone searching for Reddit, Washingtonians gave it the most hits. Other states that prefer the platform include:

Mississippi tunes in to Youtube more than any other state. The 14-year-old app also placed first in these areas:

Twitter took first in just one part of the country: Washington, D.C. The most likely explanation for the app’s regional popularity seems obvious: the current president’s proclivity for late-night tweeting. With over 41,000 tweets—a number that increases daily—@realdonaldtrump is a crucial follow for the thousands of federal employees who call the nation’s capital home.

CenturyLinkQuote is an Authorized Sales Agent that offers Internet, TV and Phone Service across the United States. Find speed availability here or call us at 1-855-640-4510. For media inquiries, please contact media@centurylinkquote.com