Lifetime launched in 1984, and since then, it’s overturned expectations, revolutionized TV, and had an undeniably major cultural impact.

Don’t believe us? Hollywood pulls some of its best talent from Lifetime movies—think Rob Lowe, Zac Efron, Sarah Paulson, Reese Witherspoon, Kristen Bell…the list goes on and on. And even in 2018, Lifetime remains one of TV’s only female-centric channels, which makes the channel noteworthy in and of itself.

To determine the most-searched Lifetime movie per state, the data analyst team at Internet Service Partners scoured Google Search Queries to collect the most talked-about Lifetime movies over the past decade.

Then, we narrowed results down to the top movies and used Google Search Trends to determine which states searched for which movie most frequently. Our time range was Jan 1, 2013 to Jan 1, 2018, so the movies listed here have been topping the lists for at least the last five years. 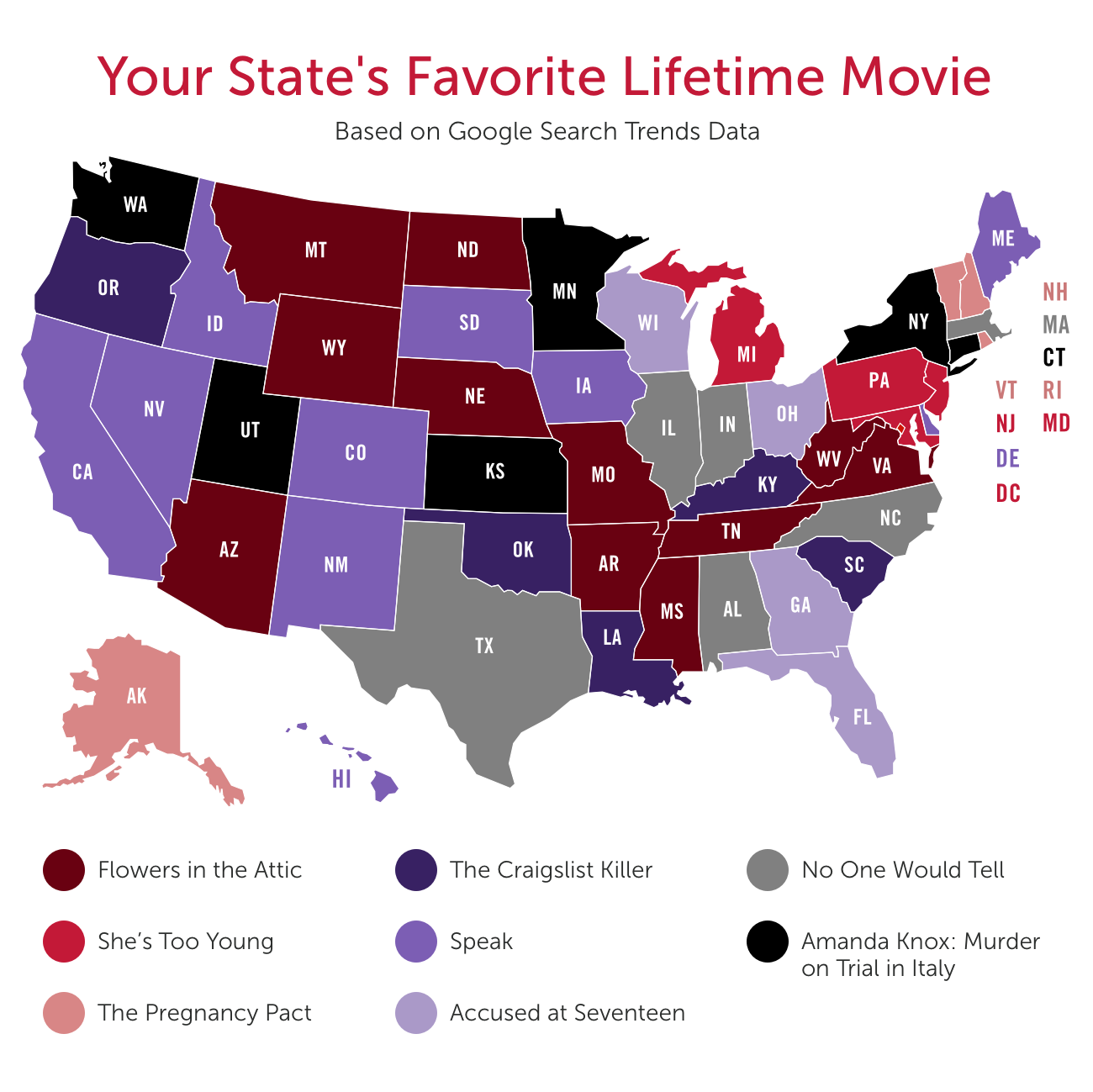 Plus, while Lifetime has a reputation for ghastly spectacle and brutalized female protagonists, the channel is much more complicated than cultural stereotypes make it seem. The success of The Bachelor critique Unreal is just the tip of the iceberg: Lifetime invests in female-directed films that resonate with today’s #MeToo movement and deploy major talent like Queen Latifah and Minnie Driver in serious—and seriously good—flicks like Steel Magnolias and Return to Zero.

Why else does America love Lifetime? Its films have broad appeal, ranging from grisly true-crime stories to well-made, heartwarming tales of women triumphing over adversity. And, of course, they’re endlessly accessible—whether you’re channel surfing or watching On Demand, Lifetime is always there when you need it.

Since America’s fascination with Lifetime has only increased with time—and since traditional fall-to-spring shows are winding down, leaving many of us with too much free time and too few shows—we decided to delve into the nation’s most popular Lifetime movies, breaking them down by state.

Based on our results, in order from most popular to least, the most-watched Lifetime movies in America are

Why Do These Films Stand Out?

Our data only gave us the numbers—it didn’t tell us why these eight movies were the most popular nationwide. They range from old to new, star-studded to lackluster, uplifting to grisly, so we can’t answer the question definitively—but we’re happy to conjecture about why these particular films resonated with American audiences over the last five years.

Americans are interested in true crime in every medium. For instance, in research for a previous blog, we learned that over 86% of Americans favor true-crime podcasts over any other genre.

It makes sense that four of the eight films on our list are based on true stories, while five of the eight are murder mysteries. And, of course, sordid true crime stories have long been considered Lifetime’s specialty.

In a world as news-saturated as ours, perhaps true-crime films give Americans a way to explore some of the most horrifying (and, there’s no denying it, fascinating) real-life news stories without opening a paper or turning on the news. True-crime movies—or at least those on Lifetime—also offer something global news often doesn’t: clear heroes and villains, logical narratives and character arcs, and a satisfying resolution.

The success of movies like Black Panther and Wonder Woman show that American audiences are hungry for more diverse movies and female leads. But Hollywood isn’t necessarily delivering, especially not on the female-director front.

In contrast, Lifetime has one of the largest ratios of female to male directors in the entertainment industry. According to data curated by Buzzfeed in 2016, 73% of all Lifetime original movies from 1994 onward were written and/or directed by women. That number is stunningly high, especially when the only 4% of the highest-grossing 1,100 Hollywood films over a ten-year span were directed by women.

Of the movies in our list, Flowers in the Attic, Speak, and The Pregnancy Pact were written and directed by women. Amanda Knox had a male director and a female writer.

It’s worth noting that the most sordid, shocking movies—the ones that most clearly objectify, sexualize, and/or victimize their female protagonists—in our list were all written and directed by men, including The Craigslist Killer, No One Would Tell, and She’s Too Young. (While Accused at 17 was co-written by a woman, the director and story creator were both male.)

We Love a Good Adaptation

The top two films on our list—Flowers in the Attic and Speak—are both based on best-selling books. Laurie Halse Anderson, author of Speak, is credited as a co-writer for the script. The adaptation fits the nationwide trend of comic book and YA novel adaptations as the industry’s most popular (and profitable) films.

Flowers in the Attic is also a remake of a previous film adaptation, though the Lifetime flick did much better critically and popularly than the original. With a clear remake fascination sweeping Hollywood (think Ghostbusters, Ocean’s 8, and Splash), it makes sense that Lifetime viewers would be in on the trend, too.

We’re Seizing the Moment with #MeToo

The fact that Speak, a film about a young woman learning to break the silence about her sexual assault, and No One Would Tell, about an abusive boyfriend, are two of the top Lifetime movies in America could indicate that women (and hopefully men) are interested in seeing films that resonate with the modern #MeToo movement.

Based on our data, you might not need to feel so guilty about indulging in the occasional Lifetime movie. Not everything you find there automatically falls into the so bad it’s good genre—some, according to audiences, critics, and industry movers and shakers alike, are simply….good.

For instance, Speak was nominated for and/or won the following awards:

Surprised that Lifetime movies win awards? Don’t be. Lifetime’s biopics and mini-series have been nominated for Emmy awards multiple times since 1995, showing the channel has more creative talent than public perception gives it credit for.