Most Popular Creepy Podcast by State in 2017 - CenturyLinkQuote
Order Online

Most Popular Creepy Podcast by State in 2017

Did you know that four in ten Americans tune in to podcasts these days? The popularity of podcasts has steadily risen between 10%–20% year over year. Steady growth is a good sign that this form of media will be sticking around for the long haul.

With Halloween just around the corner, what better way to bring in the holiday than listening to some creepy podcasts? Most of them are available online or on a mobile device, so all you need is an internet connection or a 4G network to enjoy them.

We used Google Search and Google Trends to collect and analyze data around each state’s favorite creepy podcast in 2017. The results confirmed some beliefs we already had but also brought new ones to light. 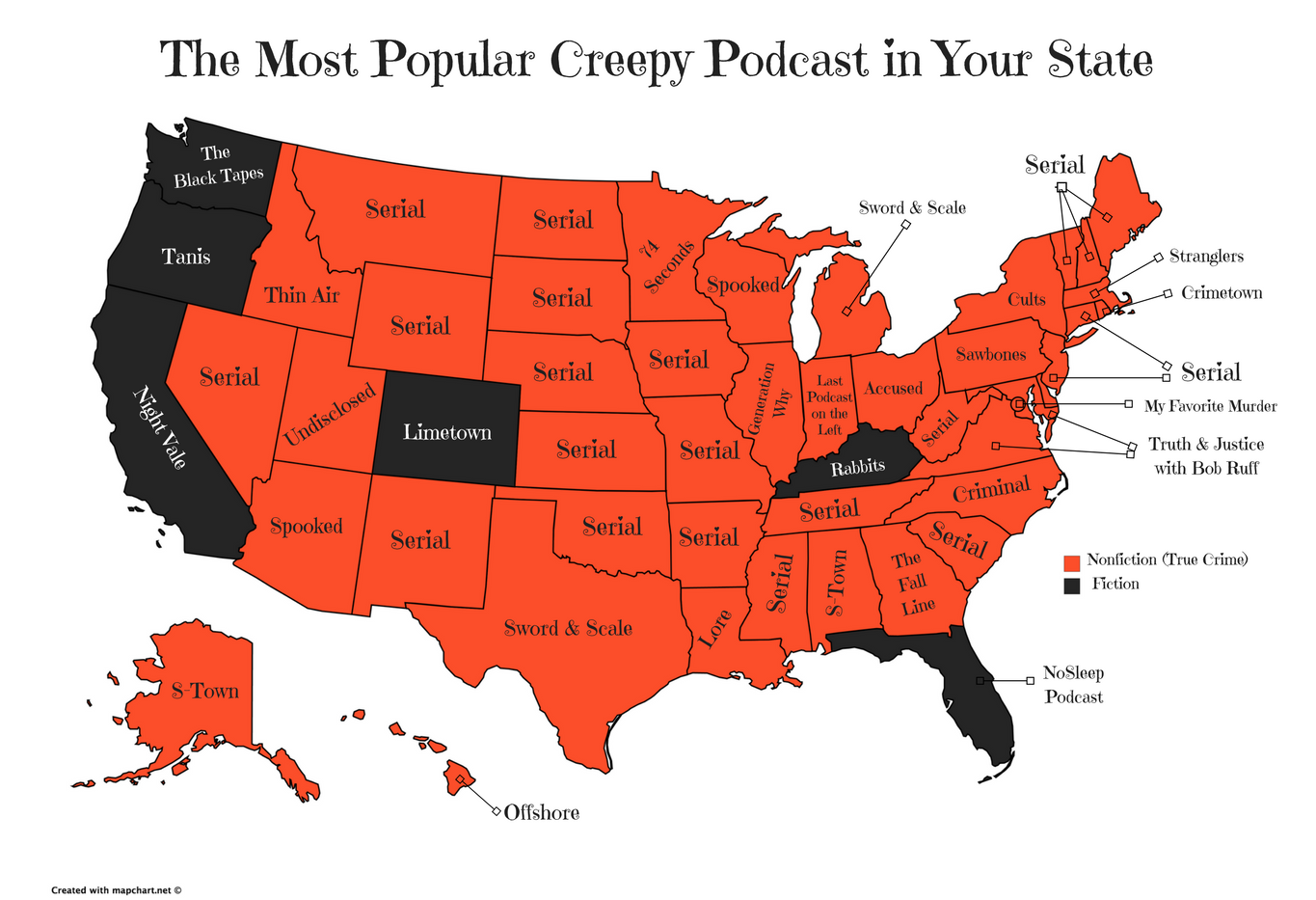 The Obsession with True Crime Podcasts

Our data shows that 86.5% of the nation is more interested in true crime podcasts than fictional podcasts. But why? Is the subject more relatable, and therefore more real?

“The public is drawn to true crime because it triggers the most basic and powerful emotion in all of us—fear,” says Scott Bon, Criminology Professor at Drew University. True crime means a crime that could happen to any of us, and that alone is enough to increase the fear factor in podcast listeners.

Serial is the mother of all true crime podcasts. It was the first of its kind and it has spawned multiple spin-offs. It first debuted in fall of 2014, and our data shows that 42.3% of the country still prefers it over newer creepy podcasts.

Serial was developed by NPR’s This American Life and breathed life back into true crime stories. It single-handedly drew enough attention to get a retrial for the main suspect, Adnan Syed, in the original crime. In turn, this news spiked the podcast’s popularity in the summer of 2016.

It’s probably safe to say that these five states are also the least interested in listening to podcasts overall. But perhaps Serial’s ability to influence a real-life crime case and become part of the story, rather than just telling the story, has made its popularity so long-lasting.

There was one podcast that scored second place in over fifteen states: Last Podcast on the Left. The website writes, “from demons and slashers to cults and serial killers, The Last Podcast is guaranteed to satisfy your bloodlust.” Last Podcast covers both true crime and fiction stories, always with a sprinkle of dark humor.

The data suggests that these areas have the most people frequently tuning in to podcasts.

Not surprisingly, states favor podcasts that take place on their home turf:

Podcasts Based on Wrongful Convictions

Among the true crime podcasts on our list, four of them focus specifically on wrongful convictions. These podcasts include the following:

This puts exactly 50% of “creepy podcast” listeners tuning in most frequently to podcasts focused on wrongful convictions. Could this allude to a deeper issue in our country? Perhaps this statistic suggests society has a stronger interest in following the actions of the government and how the law impacts people’s lives.

©2020 Internet Service Partners. All Rights Reserved. The name CenturyLink and the pathways logo are trademarks of CenturyLink.