What Is Antivirus Software?

In 2014, more than 317 million new computer viruses, worms, trojans, and other malicious software — also known as malware — were released, which is the equivalent to nearly one million new threats each day. As a result of so many viruses flooding the Internet at large, it’s possible that nearly one-third of the world’s computers have been affected.

Computer viruses have been around almost as long as the Internet, and while there’s no definite date, it’s believed that the first antivirus software program was developed in the late 1980s or early 1990s. While antivirus software has significantly evolved and improved since then, the basics remain the same. The software is used to scan for, detect, expose, and remove malware and help protect your computer from future viruses and attacks. Some antivirus software also protects against other unwanted programs, such as spyware and adware. Read on to learn more about the importance of reliable antivirus software.

Why Is Antivirus Software Important?

Even the most tech-savvy users are at risk of becoming the victim of a hack at the moment that they connect to the Internet. Antivirus software is essential because it protects against three major threats:

Viruses are most commonly acquired by downloading infected files or visiting a phishing website, and hackers are constantly developing more sophisticated viruses that appear to be safe files or websites. An infected computer can slow down, delete files, or become unusable.

Spyware is a type of malware designed to steal personal information stored on your computer. Through the use of spyware, hackers can gain access to your bank accounts, credit card numbers, account usernames and passwords, and other personal information. With this information, they can steal your identity, make purchases with your money, and more.

Are you suddenly receiving emails and seeing pop-up advertisements every time you use the Internet on your computer? If so, you’re being spammed and it’s likely coming from a virus stored on your computer. If you can’t find and remove the virus, you’ll keep receiving spam. 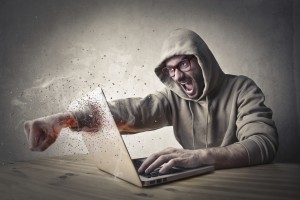 Are PCs or Macs More Prone to Viruses?

A common myth is that PCs are more vulnerable to viruses than Macs. Less than a decade ago, this was the case due to Apple’s smaller user base. For hackers to make the biggest impact, it makes the most sense to create viruses that infect the most frequently used hardware. A decade ago, that was the PC.

In 2009, around 90 percent of web traffic came from PCs and only 6 percent from Mac computers. However, by 2015, traffic from PCs made up just 41.7 percent and Macs 5.4 percent, with the rest coming from tablets and smartphones. But what those numbers don’t reflect is the increased number of connected users overall — and that greater usage has made it more profitable for hackers to attack both Windows and Apple operating systems. So while there may be a wide perception that PC users are more vulnerable, recent attacks against Macs serve as good reminders that viruses and malware don’t discriminate.

Do I Need Antivirus Software?

What Are My Options for Antivirus Software?

There are dozens of antivirus programs available, both free and paid. Here are some of the most reliable software options on the market:

One of the highest rated free options for PCs is from Panda Security. A “set it and forget it” program, Panda Antivirus relies on the Cloud to protect your computer while you use the Internet. You never have to update it or run scans.

For Macs, one of the top rated free programs is Avast. Protecting your Mac against malware, Avast runs a continuous stream of small automatic updates, which keeps your protection current without slowing down your computer.

If you don’t mind paying for a program and you’re looking for an antivirus software that provides advanced features, Norton Security is one of the best options for both PCs and Macs. The Norton Security Standard program provides real-time protection against viruses and malware, delivers comprehensive protection most free programs don’t offer, safeguards your identity and online transactions, and even comes with a 100 percent virus-free device guarantee.

Once your computer is equipped with antivirus software, you can feel more confident in your Internet browsing. Learn more about CenturyLink Internet and Internet home service bundle packages available in your area by calling 855-972-6589.