How Fast Is DSL?

It may be easy to ignore your Internet speed, but it affects how much you can accomplish on the Internet as well as how many people in your household can be online at once. Fast Internet speeds are important for streaming movies, posting pictures to social media, sending business emails, and video chatting with family and friends.

DSL — or Digital Subscriber Line — is one of the most widely used Internet connections. It is a popular choice for its accessibility, reliability, affordability, and speed.

DSL delivers the Internet through telephone wires that are already connected to your home, though you don’t need a landline telephone in order to enjoy DSL Internet connection. While dial-up Internet also uses telephone lines, it actually makes a call to your Internet Service Provider (ISP) — tying up your landline to connect to the Internet. DSL, however, communicates on different frequencies than telephone voice data, allowing you to use your landline and surf the web at the same time.

While dial-up can be slow and unreliable, your DSL connection is always on and doesn’t require you to connect every time you want to access the Internet. DSL is available in many locations, though speeds will vary. You can easily check which ISPs provide DSL in your area, but make sure you know what to expect before settling on an Internet plan.

These key terms are commonly used to describe Internet speeds. Knowing them will help you as you research DSL speeds and the best Internet connection for your needs.

What Affects Your Internet Speed 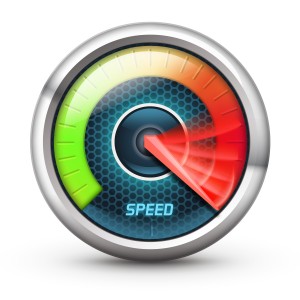 Depending on its speed, DSL can qualify as broadband Internet. Broadband Internet is a type of high-speed Internet defined by the Federal Communications Commission (FCC). A recent Pew Internet study found that 67% of Americans have broadband connections in their home.

DSL is one of the most popular forms of broadband Internet — others include cable, satellite, and fiber-optic. These connection types are not available everywhere. Fiber-optic, for example, requires an underground network, which is currently offered in only a few areas around the United States.

Each of these options provides a different bandwidth range and latency rate. Latency rates are key Internet performance indicators, as they measure the time it takes for data to travel round-trip between a computer and its ISP. The FCC measured latency rates in 2013 and found that DSL’s latency rate was 44 milliseconds (ms) — slower than both fiber-optic (18 ms) and cable (26 ms). However, DSL Internet is often much less expensive than cable and fiber-optic Internet, which makes it the best option for many customers. 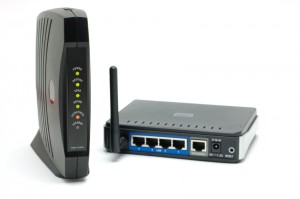 To access the Internet, you need a modem to communicate between it and your devices. If you want multiple devices to wirelessly access your network, you also need a router. Place your modem and router in a central and unobstructed location in your home for the best Internet signal.

If you do not have a router, you’ll need to connect your computer to your modem with an Ethernet cable. For a wireless environment, you’ll want a router so you can access the Internet from anywhere in your home. You can also choose to purchase a unit that contains both a modem and router. Depending on the DSL Internet option you choose, your CenturyLink modem may double as a router.