The Most Gamer-Friendly Cities in the World

Decades ago, the phrases “gamer culture” and “gaming industry” might have seemed counterintuitive—but today, around 2.2 billion gamers support a nearly $109 billion industry. From the popularity of games such as Fortnite, League of Legends, and Call of Duty to game-based movies including the newest Tomb Raider, it’s clear gaming is a crucial cultural staple and here to stay across the globe.

Where in the world does gaming thrive? Below, CenturyLinkQuote analysts have compiled a list of the most gamer-friendly cities. We’ve highlighted the top 10 in the map below, and you can see the top 30 cities by viewing the table at the bottom of this article. Use our list to plan your next vacation, add a few stops to your bucket list, or simply see how your city’s gaming culture compares to some of the world’s best. 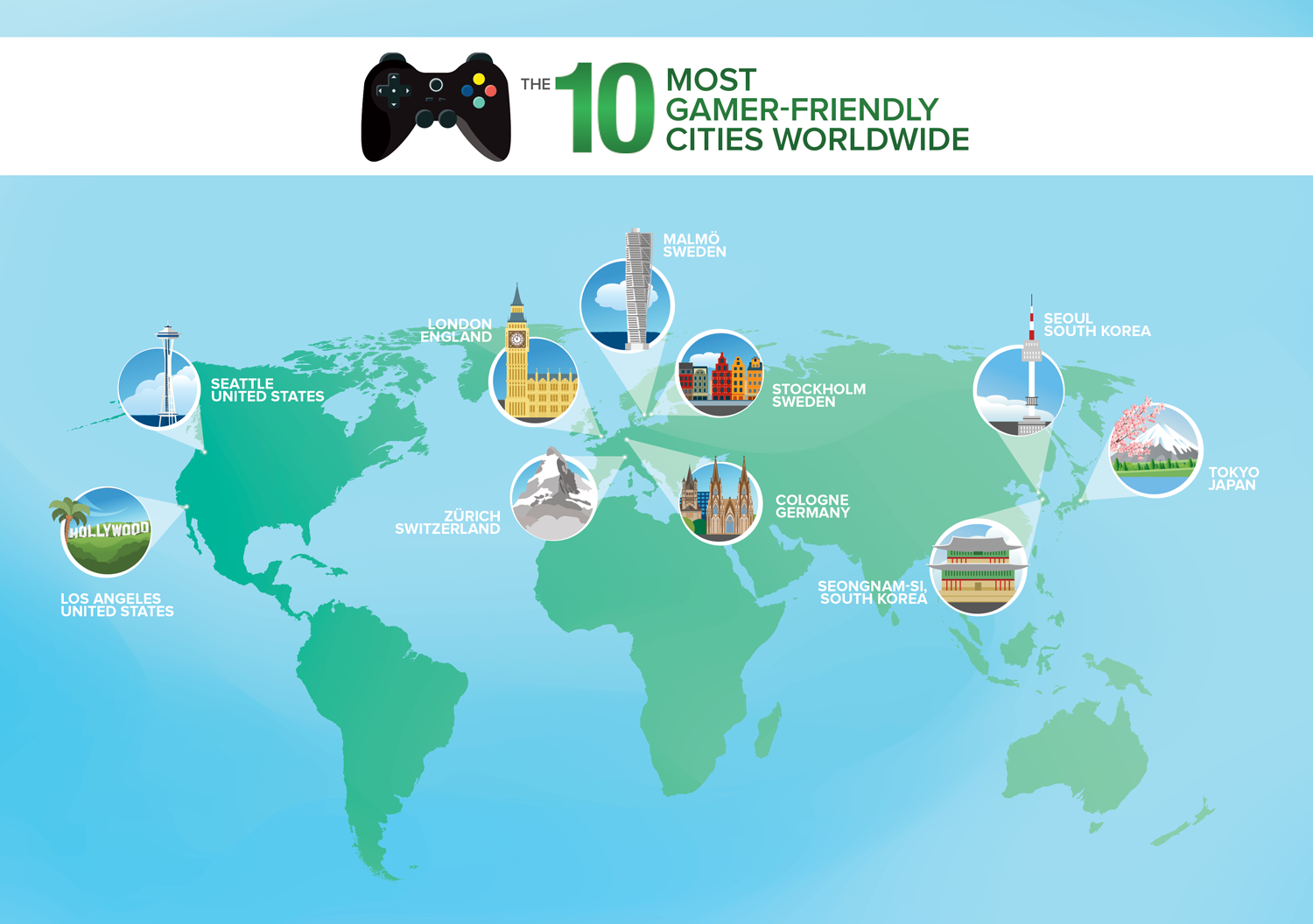 If you know anything about South Korea’s technological prowess, Seongnam-si’s number-one status shouldn’t surprise you. South Korea consistently ranks as the country with the fastest internet in the world—in fact, it’s the only country where average internet speeds top 25 Mbps. Free high-speed internet is available on public transit, and South Korea aims to commercialize 10 Gig speeds by 2022.

Like Los Angeles, Seattle has long surpassed Silicon Valley in terms of gaming culture and tech advancements. Along with being home to Microsoft, Seattle welcomes hundreds of gaming companies, and the University of Washington is just one of several universities in the area that offers a degree or certification in game design.

Whether you prioritize a high-speed gaming experience or a welcoming, social gaming culture, you won’t find a better city than Seoul. Partially thanks to Seongnam’s proximity, Seoul is well known as the eSports capital of the world—you could easily make the case that the area is the birthplace of eSports. If you’re visiting Seoul,  make sure to add the Yongsan eSports Stadium to your list of must-visit gaming sites.

Nordic countries such as Sweden have some of the fastest internet speeds in the world—not quite up to South Korea’s high standard, but easily surpassing average download speeds worldwide. So it makes sense that Sweden, along with South Korea and the US, is one of the three countries to have two high-ranking cities on this list.

Malmö isn’t Sweden’s capital, but it is the capital of Sweden’s Skåne county and one of the area’s major IT hubs. Massive Entertainment is based on Malmö along with at least 30 other gaming studios and developers. And since 2017, The Final Tribe—the highest-ranked eSports team in the nordic region—jas called Malmö home.

Like Los Angeles, Stockholm hosts several major game developers, including Mojang (Minecraft) and King (Candy Crush). In fact, Sweden has one of the largest concentrations of developers worldwide, so if you’re looking for an international job in the gaming industry, Sweden is the perfect place to start. If you’re looking not just to game but to learn something, too, the Stockholm Spelmuseum—the Museum of Video Games—offers hours of entertainment and education for the entire family.

Similar to other cities on this list, Zürich is home to a variety of gaming and eSports expos where developers reveal new products gamers can test on the floor. For instance, the Ludicious Zürich Game Festival held in early 2018 brought gamers, developers, companies, and students together to release and explore new products. The Zürich Game Show also invites gamers to enjoy new games, not just in eSports but in virtual reality and cosplay too.

In the gaming world, Cologne, city of cathedrals, is known mainly for Gamescom. Apart from the Asia Game Show, which takes place in Hong Kong, Gamescom has the largest space and most visitors of any other gaming con. Gamescom is a fair-trade market where gamers can test and purchase the best new games, test unreleased games, and check out the latest gadgets and tech.

Tokyo natives are at least as steeped in gaming culture as Seoul’s. While Nintendo headquarters is located in Kyoto, you’ll find Pokemon Centers across Japan, including one in Tokyo, where you can pick up all your Pokemon games and merch. The Akihabara area of Tokyo is a must-see for any gaming fan; the cosplayers, stores, and atmosphere make Akihabara look and feel like a scene from your favorite game, anime, or manga.

One of the top-ranked eSport teams in the world is the London-based Fnatic. Even if you’re not an eSports professional, there are plenty of London venues where you can test your mettle and improve your skills. Visit a Meltdown pub to experience a mixture of British pub and video gaming culture, or go all in by visiting the recently opened Red Bull Gaming Sphere.

Here’s a breakdown of how each city ranked related to each factor:

To determine which cities were the most gamer friendly, the data analysts from CenturyLinkQuote collected data related to factors that best reflect the gaming landscape. These factors include the following:

From there, we weighted and normalized the data to determine each city’s final ranking.

Most of these cities can support such a heavy gaming culture because of their high-speed internet: if you’re a gamer, check today to see if speeds up to 1 Gig are available in your area!