It seems like every day, kids are more and more attached to their phones and computers. They might be surfing the web for the latest meme, checking Twitter to see what’s trending, or looking to see how many “likes” their last Instagram post received (have to make sure that lighting is on point).

On average, children get their first smartphone as early as 10 years old. Because of this, they are more susceptible to internet crimes, cyberbullying, and malware. In fact, nearly 8,000 victims of internet crimes in 2018 were under the age of 20, leading some states to implement laws to help protect children from cyberbullying and sexting. Malware continues to spread like a disease across devices, including those of your children.

Last year, the team at CenturyLinkQuote dug into where these crimes happen, and this year, we focused our data points to provide a more thorough analysis of what’s really happening online in your state.

CenturyLinkQuote looked at three metrics to determine how safe a state is for kids online: internet crime rate (40% of the final score), cyberbullying and sexting laws (40%), and malware infection rate (20%). Using the state report provided by Internet Crime Complaint Center (IC3), we looked at the internet crime rate per 100,000 residents aged 0-19 years old. Cyberbullying.org’s report “Bullying Laws Across America” helped us analyze each state’s laws pertaining to cyberbullying and sexting. We composed a rubric where one point was given for each law passed and only a half point was given for proposed regulations that were yet to be passed in the state. A report by Enigma Software showed malware infection rates for each state. 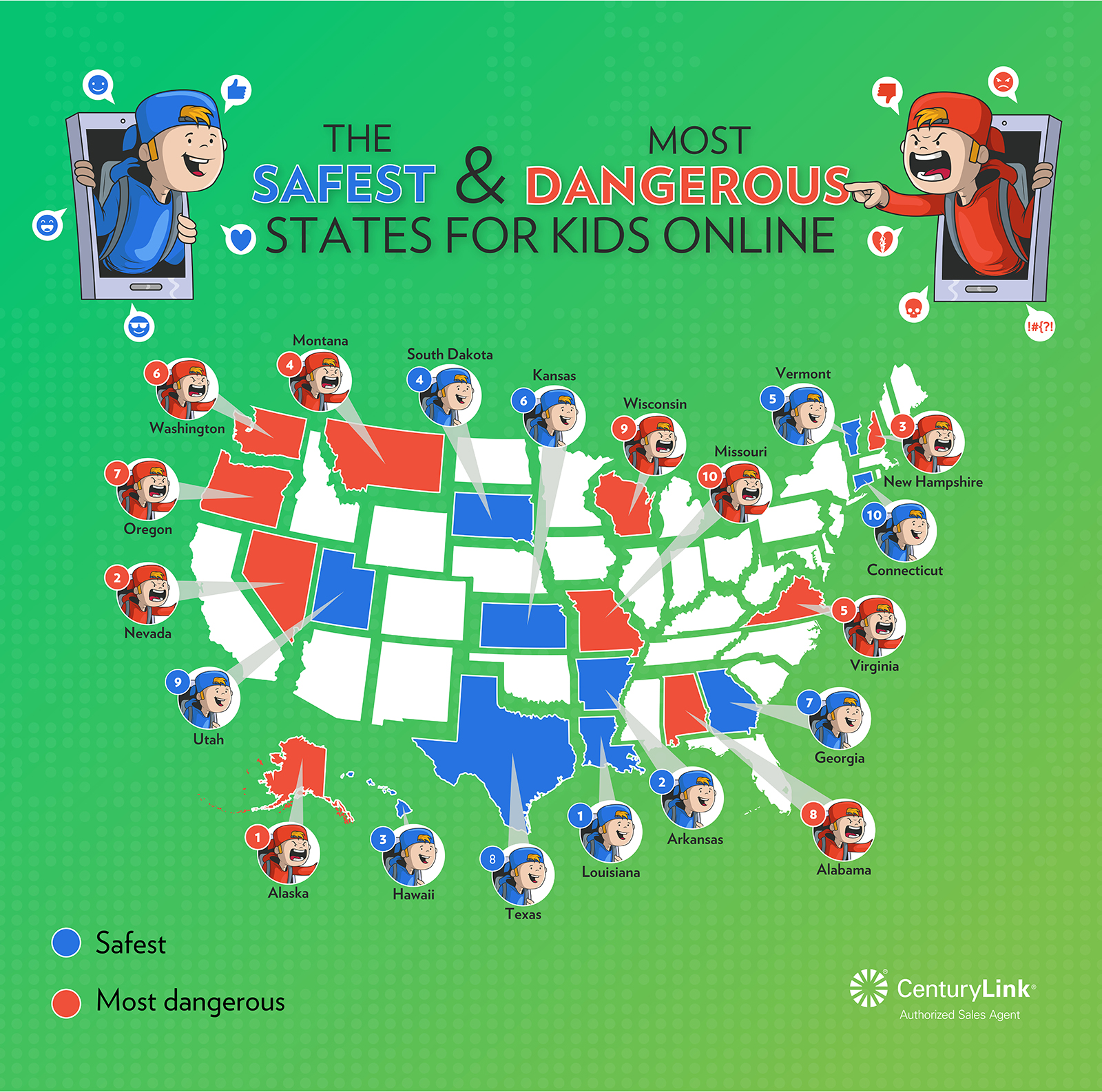 The Ten Most Dangerous States for Kids Online

Rounding out the most dangerous states for your kids online are 6. Washington, 7. Oregon, 8. Alabama, 9. Wisconsin, and 10. Missouri.

Internet Safety Starts With You

When it comes to internet safety, some things are harder to control than others, but there are ways to make sure your family is safe. Be aware of suspicious language in your emails to avoid being part of a scam. Stop malware infections with the latest security software. When it comes to cyberbullying and sexting, be involved with your children’s internet habits. If you feel like your state isn’t doing enough to combat cyberbullying and sexting, call your state representatives to express your concerns.

If you want to learn more ways to keep your family safe from the potential harms of the internet, check out our Family Guide to Internet Safety for an in-depth look at malware, identity theft, and cyberbullying, and how to recognize and prevent these things from happening under your roof.

CenturyLinkQuote is an Authorized Sales Agent that offers Internet, TV and Phone Service across the United States. Reporters can email media@centurylinkquote.com.